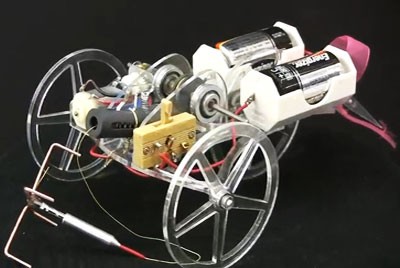 Winning Bot, placed 1st against 30 teams of bot builders in a race up an obstacle laden track of incrementally increasing slope. All teams were supplied identical motor, gearbox and batteries. Ignoring principals of traction, grip, and weigh distribution our team presented a unique approach. We choose to equip our chassis with a barrel and grappling hook, using the motor as a winch to pull us up. We pursued a lightweight, low-rolling resistance vehicle rather than the heavy, high-grip, vehicles our classmates were pursuing.

In the competition Sally climbed consistently and was the only bot to complete the steepest two slopes.

Sally's wheels and chassis is 1/8" lasercut acrylic. The cannon assembly and grappling hook shaft were turned on the lathe. She is capable of climbing a near vertical slope, and climbs the test track in 14 to 18 seconds depending on the angle.

Sally was designed and built for Mechanical Engineering 250 (ME 250) at the University of Michigan by students: Matt Grandin, Eric Harman, Jim Christiansan, Josh Bon, and Chelsea Holland. The footage above is of the actual competition and shows other entrants. Video by Matthew Grandin. 4/14/2010